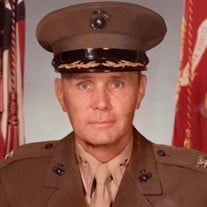 Colonel William John McGrath, USMC (Ret), peacefully passed away with his wife Nancy at his side, on August 19, 2021. Beloved by his family and respected by the community, he was a man of highest integrity. He was frequently sought for his wise counsel and compassion. Bill became a friend to all he met. Born and raised in Worcester, MA, he attended the College of the Holy Cross where he was very proud of being a member of its prestigious basketball program. He received a master’s degree in counseling and psychology from Assumption College Graduate School as well as attending the Naval War College in Newport, RI where he was a distinguished graduate. Following Holy Cross, Bill joined the United States Marine Corps. After receiving his commission, he attended Basic School at Quantico, VA and was assigned to Marine Barracks, Washington, DC. (8th&I) During his Marine career which spanned more than 30 years, Bill served abroad in Vietnam and in Okinawa, Japan, as Commanding Officer, 3rd Force Services Support Group. He held numerous posts in the United States: In Philadelphia, PA, he was the Executive Assistant to the Commanding General of Marine Corps Supply activity, relocating all personnel and equipment from that location to Albany, GA; in Washington DC he was chief of Supply and Maintenance, Headquarters, Marine Corps. Three times decorated with the prestigious Legion of Merit Medal with 2 stars, Bill’s other personal decorations include the Defense Superior Service Medal, Bronze Star Medal with Combat “V”, Combat Action Ribbon, Navy Unit Commendation, National Defense Service Medal, Sea Service Deployment Ribbon, Vietnam Service Medal with 4 Stars and Republic of Vietnam Meritorious Unit Citation Gallantry Cross with Palm and Frame. Bill was also proud to have offered counseling to numerous people in need. While in the Service, he developed a command drug and alcohol program and was a volunteer counselor for the State of New Jersey’s toll-free crisis and alcohol hotline. Upon retirement and relocation to St. Augustine, he was a hospice volunteer and started bereavement programs in both Jacksonville and St. Augustine. For more than eighteen years he brought grief counseling comfort to so many in Northeast Florida. Bill is survived by his wife of 47 years Nancy, daughter Robbie Richman, grandsons Sheriden and Brenden, brother Bob McGrath, sister Eleanor Lynch (Bill), sister-in-law Sandra Tanay and numerous nephews and neices. He is predeceased by his daughter Kathleen McGrath and brothers Dick and Barry. Due to pandemic restrictions, a Memorial Service in St. Augustine, followed by internment with military honors at the Jacksonville National Cemetery will be announced at a later date. Flowers are gratefully declined but memorial donations may be made in Bill’s name to the Bailey Family Center for Caring.

Colonel William John McGrath, USMC (Ret), peacefully passed away with his wife Nancy at his side, on August 19, 2021. Beloved by his family and respected by the community, he was a man of highest integrity. He was frequently sought for his... View Obituary & Service Information

The family of Col William J. McGrath created this Life Tributes page to make it easy to share your memories.

Send flowers to the McGrath family.